In this day and age when an organization’s communications efforts are considered only as good as the tracking metrics put in place to validate them, I am most decidedly old school. While I get that analytics have their place and are here to stay as a valuable strategic tool, I firmly believe even the best metric can never trump good old-fashioned gut instinct.

In essence, when it comes to quality communications, you know it when you see it. In the case of the Texas A&M Division of Research, I routinely do.

Because the Texas A&M College of Science has the largest amount of fundamental research funding on campus, our two communications offices often have quite a bit of agenda overlap and, therefore, lots of opportunities for collaboration in reaching our broader marketing and communications goals.

Director of Communications and Public Relations Susan Wolff and her entire team’s collegiality knows no bounds. Believe me, I’ve extensively tested them — team and bounds — especially during the past few belt-tightened years. Thankfully, individually and collectively, this group subscribes to a singular purpose: providing an invaluable service role for campus units in need of central resources or signal amplification, from governmental relations and federal-funding radars to general societal awareness. Texas A&M Science has been one of the biggest beneficiaries of their goodwill, punctuated in both b-roll and stand-alone pieces for feature stories and news releases from their videographers, sundry retweets and elevated online placements from their social media and web developers, and on-the-fly assistance for professors in need of video or artistic services from their graphic designers and illustrators. 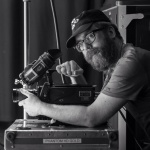 The first scenario is how I came to meet Jeff Gustafson in spring 2013 as the videographer in charge of a memorable and most fruitful shoot in Texas A&M chemist Karen Wooley’s laboratory. Admittedly, even prior to that March 7 shoot, I was intrigued by two things: He was a graduate student in the Department of Visualization’s master’s of visualization sciences degree program, and he preferred the nickname “Goose.”

True to form, I arrived on set just as Goose was wrapping up color and lighting testing with Susan, who was serving as Dr. Wooley’s stand-in. He moved fluidly about the tight scene, pausing between equipment adjustments and final checks to introduce himself, punctuating that first impression with a warm smile and a firm handshake. For the most part, I was able to contain myself and simply observe, but in what amounted to a moment of foreshadowing, I did spontaneously extend the shoot when I blurted out an extemporaneous follow-up question after what was supposed to be the final one in the two-hour session.

That day, Goose graciously kept the cameras rolling. In the subsequent days, neither he nor any other member of the Good Ship Research Communications has stopped humoring me in a variety of ways big and small. The resulting videos — oil-absorbing nanoparticles and anti-biofouling polymer coatings, among others — speak well enough for themselves, but for me, the proof is in the many projects in between that day’s final shot/cut and the present.

Which brings me to this sweet bonus — a stylized compilation of cuts from shoots in various Texas A&M Science labs by Goose and fellow videographers Eric Burke and Bhakti Duran, complete with some editorial nudges from Susan. The timing, the touches, the colors, the precision, the overall synergy and synchronicity . . . I am absolutely blown away.

My gut says it’s a perfect mix of art and science. Susan and her crew simply call it a gift to Texas A&M Science. Fitting, considering that’s precisely the word I would use to describe them with regard to this campus and its communications.