Ever find yourself so focused on the little things wrong that you miss the big picture of all that’s right? Easy to do when the day-to-day begins to rule not only the day, but also the week, then the month, then the next month, and so on. Sometimes it takes conscious effort to break this vicious cycle, but thankfully, there’s one routine assignment each year in the late spring/early summer that guarantees I stop and smell the maroon roses (so to speak) representative of Texas A&M Science. And boy, were they particularly fragrant in 2013. Or 2012, I should say.

Each year Texas A&M Science Communications compiles an annual report cataloguing our teaching, research and service efforts across all departments for the previous calendar year. Collectively and per individual tenured/tenure-track faculty member. It’s no small endeavor, with the end result being as weighty as the three-ring binder in which it arrives. One of the first pages within said binder is a foreword from Dean of Science Joe Newton summarizing the highest of the year’s high points — my primary contribution to the larger effort, which mostly involves pinning Dr. Newton down and making him focus on the rear-view mirror even as he’s engrossed in all levels of forward-looking responsibilities as our designated driver. Typically each department head also provides a foreword for each respective unit. All in all, it’s pretty impressive information that definitely goes against the Aggie tradition of humility (arguably the eighth core value!) but speaks volumes about what we value as a college and across the fundamental sciences and professions we represent.

Rather than relegate that summary to the binder for another year, I want to share it here so that you, too, can see it’s been a good year for the roses. Congratulations, Texas A&M Science, but your work here isn’t done. We’ll get more binders ordered…

FOREWORD FROM THE DEAN (2012 Annual Report)

As dean of the College of Science at Texas A&M University, it is my obligation and privilege each fall to take stock of our progress toward our three-part university mission — teaching, research, and service — and to reevaluate our collective commitment to ongoing excellence in all respective phases.

I am pleased to report that the Texas A&M College of Science continues to deliver on its unspoken yet inherent promise to advance discovery and solve real-world problems. In the past year alone, our scientific ingenuity has resulted in hundreds of top-notch graduates and more than $56 million in sponsored research projects that create new knowledge and drive economies around the world. Each year despite all economic indicators to the contrary, those awards steadily continue to increase, both in amount and stature, as testament to the strength of our programs and overall reputation for excellence.

Beyond research funding, the past year marked another major milestone in external fundraising — a landmark $20 million legacy gift by George P. Mitchell ’40 and the Cynthia and George Mitchell Foundation toward the George P. and Cynthia Woods Mitchell Institute for Fundamental Physics and Astronomy that followed their $25 million gift (half of which was credited to Texas A&M) to the Giant Magellan Telescope in 2011.

In global research breakthroughs, our high-energy physicists were part of international experiments at the Large Hadron Collider and Fermilab that confirmed preliminary proof for what is believed to be the Higgs boson particle. The Dark Energy Camera, for which astronomer Darren DePoy serves as the project scientist, captured and recorded its first images high atop the Blanco Telescope in Chile. First blast occurred at nearby Las Campanas Peak, marking the beginning of site preparation for the Giant Magellan Telescope, which also celebrated successful completion of its first mirror. Chemist Joe Zhou received his second Department of Energy grant in as many years to develop more efficient natural gas storage tanks for passenger vehicles. Our faculty (Alexander Finkelstein, Christian Hilty, Oleg Ozerov, Jairo Sinova, Clifford Spiegelman, Renyi Zhang) also are involved in six of the eight joint research projects encompassed in a $1.5 million campus-wide collaboration with Israel’s Weizmann Institute of Science.

One of our most cherished former students and longtime External Advisory & Development Council champions, the late Dr. Robert V. Walker ’45, received a Texas A&M Distinguished Alumnus Award, while Statistics’ Jerry Oglesby ’71 and our own chemist Daniel Romo ’86 were inducted into the college’s Academy of Distinguished Former Students.

From an educational outreach perspective, Chemistry hosted the 25th edition of its award-winning Chemistry Open House and Science Exploration Gallery, while record crowds attended both the Math MiniFair and Physics & Engineering Festival. Dozens of women participated in a three-day, national physics conference hosted by our Educational Outreach and Women’s Programs Office, while the Mitchell Institute unveiled the Physics Enhancement Program (MIPEP) to improve high school physics teaching. The Texas A&M Math Circle also was born to engage and encourage bright middle school students, while Houston-based Halliburton put its name and grant support behind a new “Mathematics All Around Us” outreach program. The Greater Texas Foundation committed $50,000 to round out a $150,000 challenge grant started by another big name in Texas industry, Texas Instruments, to benefit aggieTEACH. Finally our Center for Mathematics and Science Education (CMSE) is helping to lead a new $10 million science and technology educational outreach program funded by NASA.

In 2012 as in years past, I thank each of you, not only for another year of great achievement, but also for the continued distinction you bring to both Texas A&M University and the College of Science in your efforts to deliver the highest quality of science education, scholarly research, and technical expertise and service to benefit the world.

It’s been nearly a year since I switched careers from journalism to public relations, but the remnants of my old life still pop up now and then.

I recently attended a dinner celebrating the 50th anniversary of the Texas A&M Department of Statistics. The wine had been poured when the audience broke into the first of many bouts of applause throughout the night to congratulate the former students who had flown in from around the country.

For a couple seconds too long, I didn’t clap.

During three and a half years covering Texas A&M as a local journalist, I never clapped while working. Call me silly in my ethical pretensions, but my view is independent journalists are not supposed to be part of the establishment they cover or appear to promote it in any way. And that goes for benign events, too, like awards and graduation ceremonies.

So it’s been a change going from being a journalist to an advocate for the College of Science.

Surprisingly, an easy one.

Although there are key differences between my old role as a journalist and my new one as a writer in the College of Science, there are striking similarities beyond the obvious of each encompassing writing, interviewing and research. I loved telling human-interest stories as a journalist, and I can still tell many of those same stories now. When possible, I tried in my writing to show rather than tell, and I’m as committed to that now. And at their ideal, public relations and journalism are both about ethically and accurately presenting quality information to the public. I had a sense of purpose that my work as a journalist was in service to the taxpayer. I have that same sense now, though for a different reason. Impactful research goes on at this university, and my job is take a crack explaining it so taxpayers have a better understanding of what they are investing in.

So don’t look to me to probe below the surface of university politics. Or fire off a flurry of open-records requests. That’s not my role anymore. My job now is not independent. I am selling something. But luckily, it’s something I believe in, have believed in for years – the research that goes on in American academia, and Texas A&M especially.

And I’ll remind myself that it’s OK to clap about that.

Even after a decade in the College of Science and going on a (slightly shocking, even to me) combined 24 years as a student and communicator at Texas A&M University, I never cease to be amazed by the absolute care and creativity so many of our professors put into their teaching efforts. Take, for instance, Texas A&M Mathematics’ Jill Zarestky, who each fall since 2009 has taught a first-year seminar course, Arts & Crafts & Maths, that explores the relationship between art, mathematics and a variety of crafting and fiber arts techniques, including knitting, crocheting, needlepoint, embroidery, cross-stitch, weaving and quilting.

Zarestky, who has been knitting and teaching mathematics at Texas A&M since 2007, is active with the Brazos Valley Knitting Guild and regularly teaches knitting workshops and classes. This month, she also is a featured artist with the local Arts Council of the Brazos Valley. If you aren’t able to drop by the ACBV’s College Station headquarters to see some of her knitted works on display as part of the Fiber Arts: All Things Fiber exhibit, then check out her related guest post for their blog describing her insight into the connections between knitting and math. 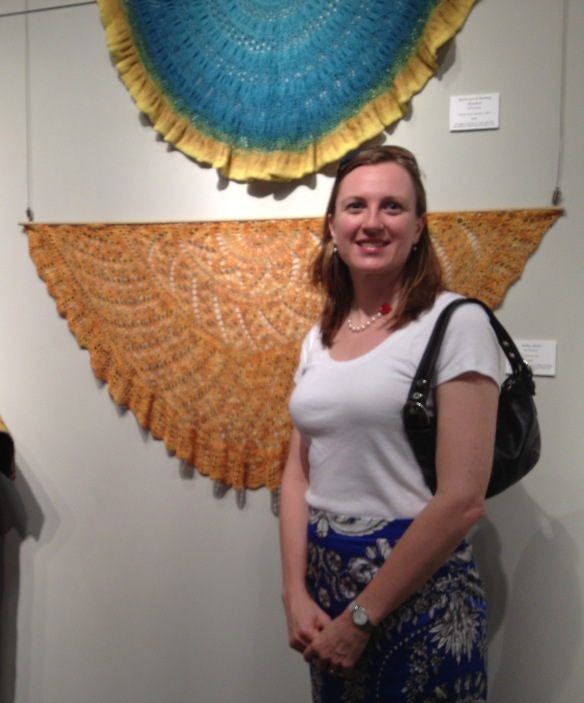 Jill Zarestky, in front of some of her work at the current Arts Council of the Brazos Valley exhibition.

The human element: It’s alive and well in Texas A&M Science faculty and in the many personal touches, obvious and subtle, they bring to their classrooms. What valuable life lessons for us all.

Bring your A game, folks, but don’t forget to pack your P (personality) one as well.