Yesterday, I caught my co-worker Chris Jarvis — who also happens to be my office suitemate — playing on the job. With a magnetic alphabet set, at that.

Today, he’s at it again, only this time it’s a set of magnetic balls, complete with a magnetized wand. 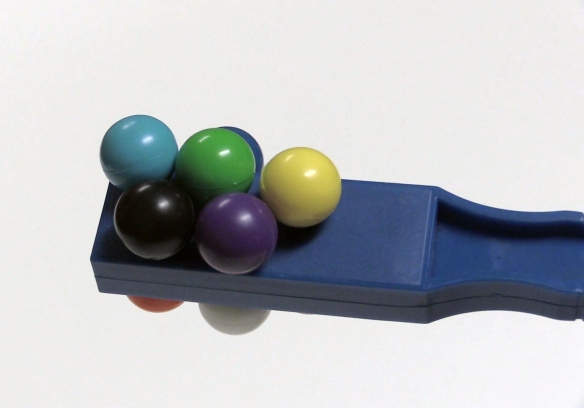 Drawing on a theme yet? I am, and I can tell you firsthand that curiosity is attractive. Because I had a few minutes today, I used the first few seconds of one of them to decide that if you can’t beat ’em, then join ’em. Yep, I grabbed the wand and tried it out. So did the next co-worker who had walked in to discuss a project. (And he said these things were low power…)

Interestingly enough, both sets of common children’s toys just happen to be part of the set for Chris’ latest video project -– an in-progress Labors of Lab installment showcasing a Texas A&M Chemistry student whose research involves molecular nanomagnets. Even though I’ve always known Chris to be the type who will go to great lengths to get the job done, I’m amazed. And pleasantly amused. And not just because he’s childless, yet visiting toy stores.

When Chris initially joined Texas A&M Science in 2008, I knew he would be a solid writer, based on his background, samples and genuine love for words. During what I like to refer to as his sabbatical year at St. Mary’s University in San Antonio, he got the opportunity to broaden his skill set, adding website creation/maintenance and videography, among other professional nuances. Last year, we got the opportunity to re-hire him, and I can now vouch for the fact that the second time around truly is sweeter. But why take my word for it when you can read his within our news archive and also view roughly a year’s worth of his videos on our YouTube channel?

I know full well what goes into a written story, but I have a newfound appreciation for all that Chris does as a videographer. I’ve worked with some of the best during my career, but I’ve never known one who is a one-stop shop, from storyboarding and script writing, to location scouting and actual shooting, to editing and production, to draft version(s) and ultimately finished product. However, I do know that I have the luxury of resting easy in the knowledge that any project I assign to Chris or that he takes on himself is in good hands, largely without me lifting a finger nor checking up on a single detail beyond our initial conversation.

Although most of this magic happens less than 20 yards away from me, I never fully got the picture until last month, when Chris produced what I think is his best work yet: an overview piece for this year’s National Science Foundation-funded Summer Research Experiences for Undergraduates (REU) Program. Six different programs across the college; one university-wide supplement; at least one coordinator per program; countless student participants; multiple locations, shoots and interviews during the course of the 10-week program; and hundreds of clips, all funneled into a single cohesive, comprehensive, well-told story. It’s definitely an art (an undervalued one, in my opinion), and I am in awe. Feel free to appreciate with me below and also check out a few bonus clips featured with the news summary:

Most of us are familiar with some version of the old adage, “Work to live, not live to work.” Based on what I’ve seen, Chris is well on his way to having this one down to a science.

By all means, play on, and always remember to share — toys and talents.

For the students who traveled from across the state and nation to participate in Texas A&M’s Summer Research Experiences for Undergraduates (REU), the annual Undergraduate Research Poster Session is the program’s pinnacle. It’s here that they get to showcase the results of their research projects and bask in the culmination of two months of grueling lab work and analysis, not to mention all the trial and error in between.

The poster session is not only a well-deserved celebration of their success, it’s also one final benchmark for these young scientists; they get to personally discuss the results of their research projects with their peers and other faculty besides their designated mentors. It boils down to huge opportunity to really show how much they’ve learned over the summer and do a little networking to boot

See what the poster session is all about.

Want to find out more about the College of Science’s REU programs? Here’s a video overview, and you can also check out photos from this summer.