One of the things I enjoy most about video production is that it gets me out of the office. Don’t get me wrong, working in the luxury of air conditioning can be really nice in the summer, but anyone can go a little stir-crazy if they spend every single day at a desk. But every now and then, my job takes me places, and during production of our most recent Labors of Lab segment, it took me back home.

Laura Schwab, a senior biology major at Texas A&M who studies aquatic insects, is the star of our latest installment. As I was beginning the storyboarding process for her episode, Laura’s faculty advisor, Dr. David Baumgardner, invited me to film her and a few other students as they trapped insects at the Navasota River. Well, it just so happens I’m originally from Navasota, so this would be a homecoming of sorts for me. Sign me up! 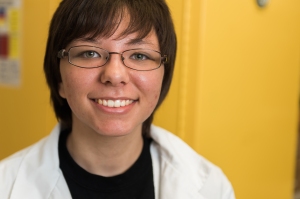 Now, let’s be clear: The Navasota River isn’t what you would call a “pretty” river. It’s muddy, and there’s usually no shortage of algae. But it is buzzing with wildlife, especially the aquatic insects the students were so hoping to capture. And even though I grew up in that area, I’d never actually been near, or in, the Navasota River. This was a shoot I was truly looking forward to, even on a Saturday.

Laura turned out to be an excellent choice for a Labors of Lab spot, and it was quickly apparent that she was Dr. Baumgardner’s right-hand person. Upon our arrival, they immediately divided up the students and waded into the river, where they embarked on separate excursions. While Dr. Baumgardner led two of the students off to catch insects in the river’s current, Laura and two other students went searching for snag, the random sticks and natural debris that protrude from calm parts of the river that often serve as nesting grounds for many water bugs. 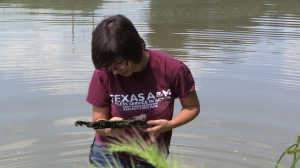 It was here that Laura’s natural leadership shined. She carefully chose which area of the river they would scour for snag, all while explaining to her team the reasons for her selection and demonstrating the proper way to collect a specimen. Whenever they found a particularly mossy stick that looked like it might be serve as a decent home for insects, they carefully doused the end of it in an alcohol solution and secured it in a Ziploc bag. 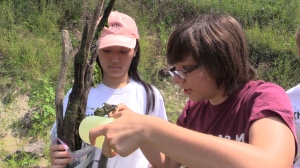 It was fascinating to watch. In the videos I produce, I often only film people talking about their research and, usually, I’ll stage scenes of people pretending to work on their research so it appears as if they’re actually doing something fascinating in the final video. Never have I actually had the chance to film genuine research in progress — until now. The scenes I filmed at the river that day were some of my best, in my opinion. Undergraduate students doing real research, having real fun. You can’t fake that. 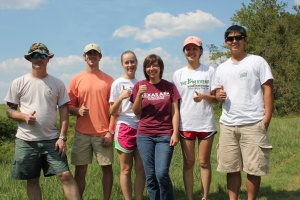 Oh, and speaking of that spot, watch Laura in action and hear her thoughts on doing field work for Dr. Baumgardner’s lab in our latest Labors of Lab episode below: