Rainbows — who doesn’t love them? Everyone — no matter what age, no matter how bad their day is going — will stop and admire, even if only for a second or two, those beautiful arches of color whenever they happen to appear. 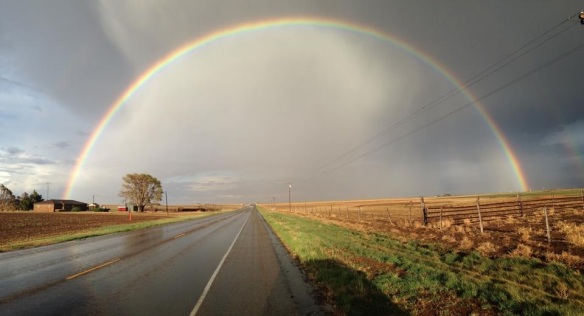 Our infatuation with them goes back thousands of years. In many religions, they are viewed as a sign or message “from above.” In many cultures, they are a symbol of peace and hope. In this day and age, however, rainbows make fantastic social media fodder, and if there’s been a good rain, it’s almost certain that you’ll find at least one picture of Mr. Roy G. Biv.

So last week after a wet several days, Shana and I took to our Facebook machines to skim the obligatory rainbow pics posted by our friends, and we noticed something rather interesting — several shots of unusually flat, double-rainbows. 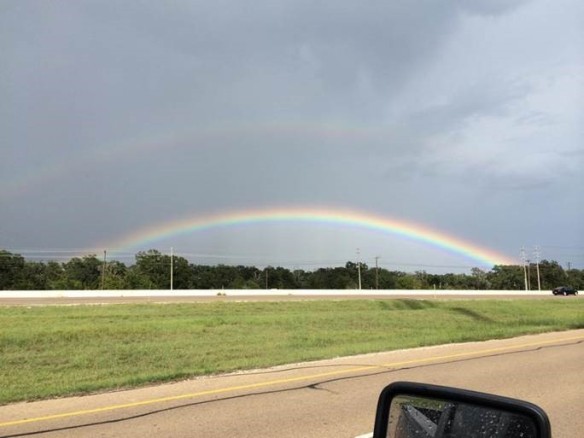 Being the curious science enthusiasts that we are, we wanted a logical explanation for these oddities. Shana decided to consult our go-to guy for any inquiry involving the sky — Dr. Nicholas B. Suntzeff, University Distinguished Professor of Physics and Astronomy.

We learned that rainbows are naturally 360 degrees, and half of it lies below the horizon where there is no moisture. As for why our rainbows in question had less arch than normal, Dr. Suntzeff explained:

“It is flat because the photo was taken during the middle of the day. The rainbow is circular around the anti-solar point. Here, the anti-sun must be way below the horizon.”

He also passed along this link that offers a very detailed explanation:
http://www.atoptics.co.uk/fz795.htm.

There you have it — rainbows are naturally circular, thus eliminating any hope for ever finding that pot of gold at the end of one.

At least they’re still pretty to look at.

(Incidentally, for those who might want to try that water-hose experiment to see the full 360-degree effect in action, I’d recommend leaving your dog, if not your adorable toddler, inside. Curious? Click here.)

EDITOR’S NOTE: Anything look familiar, from photo to explanation, in this September 30 Astronomy Picture of the Day? Just goes to show this is phenomenal double stuff the world over!