Cross-country road trips present the perfect opportunity to let your mind wander. The possibilities (much like the road) are endless, particularly if you’re a scientist.

Meet Dwight Bohlmeyer ’84, who earned both a B.S. in marine biology at Texas A&M University at Galveston in 1984 and an M.S. in genetics from Texas A&M University in 1989. A former department head for the Division of Natural Science (2009-2014) and a longtime biology instructor (1997-2014) at Blinn College’s Bryan campus, he recently joined the Texas A&M Institute for Quantum Science and Engineering, where he manages the Salter Farm Educational Research Program.

Dwight and I met this past fall by way of Monarch butterflies and related marketing opportunities. He’s a glutton for all things STEM education, and in addition to having a keen eye for photography, he has the science background to make it beneficial beyond the beauty. If you follow us on Facebook, chances are you’ve probably seen some of his work.

In fact, it was via Facebook that I first learned about his latest project, a daily nature photography challenge to capture five species a day throughout 2015 for a total of 1,825 species by December 31. He dreamed it up as a rather unique New Year’s resolution while filling mental space during his return trip to College Station from Missouri, where he was visiting family for the holidays.

Even though I know these things are all about stretching one’s limits (which I like to think I accomplish by default as a full-time working mother of three), I think Dwight’s really outdone himself here and that the results will be well worth following. And we can all do just that at FIVEx365, the WordPress blog he’s set up to help document his results and keep him accountable like the disciplined scientist he is. He even has rules, which he outlines in the first entry.

And to think, all this time, I’ve been jamming out to mixed CDs and XM Radio during my extended travels. Get the picture? 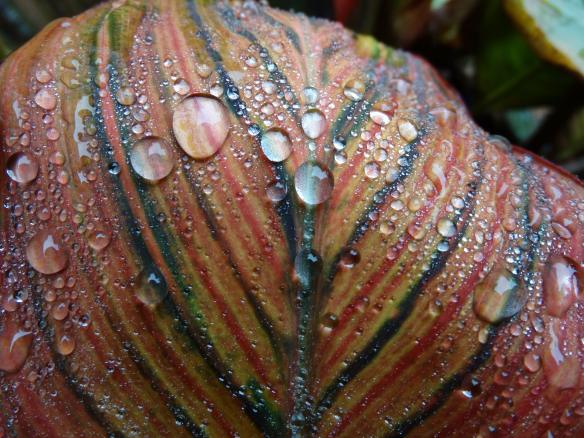 A cold and rainy start to 2015, beautifully illustrated by Dwight Bohlmeyer using a canna lily as both his artistic and scientific medium. See more of his work at FIVEx365. (Credit: Dwight Bohlmeyer)