Last week Texas A&M University hosted a familiar face and cherished friend in one Robert M. Gates, 22nd United States Secretary of Defense and 22nd President of Texas A&M, who was here on campus to discuss his new book, DUTY: Memoirs of a Secretary at War. As expected, Dr. Gates packed Rudder Auditorium and had his audience hanging on his every warm and oftentimes humorous word.

Two Texas A&M presidents removed and two jobs later, Dr. Gates remains a man much revered in Aggieland, if not for progressive plans like faculty reinvestment, then for more student-centric feats like first-year grade exclusion and the university studies degree. (Or, in my case, as the guy at the helm when journalism died, but that’s another subject, one for which I’ve mostly forgiven him. Mostly. And I even understand the dairy center, given that yesterday marked the 29th anniversary of Dad and Mom selling off our own herd and ending our family’s days in the milking pits. In short, it was time for both.)

His visit reminded me of another revered Aggie, George P. Mitchell ’40, who was a big fan of Dr. Gates and his energy when it came to Mr. Mitchell’s alma mater and its future. Understandably there as well, considering Mr. Mitchell invested as big as anyone in those dreams, adding his monetary muscle to fuel the dream for Texas A&M Physics.

That admiration was mutual, as evidenced by this quote from Dr. Gates upon hearing of Mr. Mitchell’s death on July 26, 2013:

“George Mitchell was a great man and a great benefactor of Texas A&M University. Through his generosity, dramatic improvements were made possible in many areas, including science research and teaching at Texas A&M, particularly in physics. Thanks to his philanthropy, world-class facilities and significant enhancements for faculty and students alike brought international renown to the university. His gifts also extended to athletics, particularly tennis. Personally, I thoroughly enjoyed working with and learning from him while I was president of the university. He will be greatly missed.”

These two powerful men and their visionary motivations coincided and collided in a
marvelous and near-magical way, creating the best possible hiring world and a climate of excitement and forward momentum that proved so attractive in 2006 as to actually land such an established star as Nick Suntzeff, a 20-year veteran of the U.S. National Optical Astronomy Observatory/Cerro Tololo Inter-American Observatory in Chile, to lead Texas A&M’s new astronomy program.

Thanks in large part to Dr. Gates’ and Mr. Mitchell’s dual dreams, the future is gloriously bright for Texas A&M Physics and Astronomy, Texas A&M University and the overall state of Texas. Despite being gone in vastly different extremes, both will be forever remembered in Aggieland, if not for enabling sweeping recruiting successes and other tangible program-wide gains, then for negotiating two beautiful buildings — architectural showpieces and the first on campus to be built through a unique university-private partnership involving substantial donor funds.

Here’s a bit of the rest of the story on that story, as told by Joe Newton, Dean of Science and inaugural holder of the George P. Mitchell ’40 Endowed Chair in Statistics, who reflects on a pivotal meeting involving Dr. Gates and Texas A&M’s most generous benefactor:

George P. Mitchell, 1940 Texas A&M University distinguished petroleum engineering graduate, the largest benefactor Texas A&M has ever had, developer of The Woodlands, and the leading figure in hydraulic fracking (among a host of other amazing accomplishments), passed away on July 26 at the age of 94.

Lucky enough to be in the right place at the right time as dean of the Texas A&M College of Science, I was privileged to participate in his philanthropic efforts to build fundamental physics and astronomy at Texas A&M. In the process, he became a friend. I flew on Continental Express with him. I ate at Chick-fil-A with him. Somehow he thought I had power. He would call me to tell me to fix things. Sometimes I even could. His passing has made me very sad. I cannot believe this life force has left us. 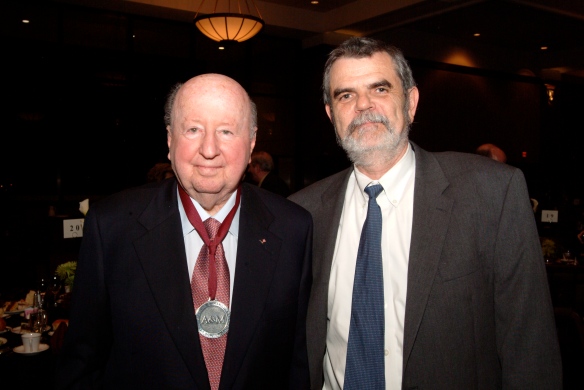 I also had the honor of knowing former Texas A&M President (and CIA Director and Secretary of Defense) Robert M. Gates. These two men came together in Mitchell’s Houston office on Aug. 14, 2005, in a meeting that changed the face of Texas A&M. It was my honor to be there, and I would like to pay tribute to both of them by describing the meeting.

Both men had already played a large role in the development of fundamental physics and astronomy on campus; Gates with his reinvestment program designed to bolster teaching and research efforts by hiring a large number of new faculty, and Mitchell with his philanthropy that created an institute named in his honor, that helped us build a new astronomy program and attract great faculty.

Ed Fry, the department head at the time (and a dreamer of the first order), had developed a remarkably close relationship with Mitchell. Fry thought that Mitchell would be receptive to a request to help fund two buildings on campus. The first would be a “signature building” architecturally to house the Mitchell Institute; the second would for the first time consolidate all of the department’s faculty and classes in one place.

The task of convincing the university to supply the matching funds that Mitchell always required fell largely to me. Mitchell routinely drove a hard bargain, but the driving premise behind his trademark matching requirement was to ensure the maximum benefit of every dollar contributed — his or the university’s — to the broader cause or project. A major component of this particular project was that the department would make no claim on space it would vacate, so that the university would in fact receive a net gain with its matching funds.

After a series of meetings with various university officials, especially Gates, it was agreed that Gates and a few others (including Fry, Texas A&M Foundation President Ed Davis ’67 and College of Science Director of Development Don Birkelbach ’70) would go to Mitchell’s office in downtown Houston to make “the big ask.”

There was a sense of history when we walked into the conference room. Mitchell, as usual, started by asking about projects in which he was interested, including the Giant Magellan Telescope. Then his attorney, Barry Levitt, suggested we talk about the buildings. The rest took perhaps five minutes. Both Gates and Mitchell had great respect for the other. There was a true sense of good will.

Gates began by saying, “I don’t want to insult Ed or Joe, but a physics building has not been one of our top priorities.” In his typical wry manner, Mitchell interrupted Gates with, “Yes, I’ve noticed.” At which point everyone laughed. “But because of all you’ve done,” Gates continued, “we will contribute $2 million toward a building to house the Mitchell Institute, and I have a suggestion for you: I have identified $20 million in cash, and if you agree to the legacy proposal we have prepared for you, we will use the first $20 million of your funds to match what we will do.”

Mitchell responded that there were problems with the proposal, but that perhaps he could do $3 million per year for five years. Gates, without batting an eyelash, countered: “The $20 million really straps me; how about you do 10 years?” Mitchell came right back at him, suggesting, “How about $2 million for 10 years?” After a pause, Gates continued to barter, “$2.5 million for 10 years would split the difference.” Then Ed Fry jumped into the fray with, “It would really help to do it in five years — how about $5 million for five years?” Mitchell said, “Same amount of money, so OK.” The deal was done!

Groundbreaking for the George P. and Cynthia Woods Mitchell Institute for Fundamental Physics and Astronomy and the George P. Mitchell ’40 Physics Building. Mr. Mitchell (hard hat), Dr. Gates and Joe Newton are pictured at center, along with several other Texas A&M professors and key administrators.

The rest is history. It took many, many meetings to complete the two beautiful buildings, but I will never forget the day these two legendary men agreed to something that greatly enhanced Texas A&M. Ultimately, with the fundamental work being done in these buildings and the resulting renaissance for Texas A&M physics and astronomy, they have indeed changed the world. 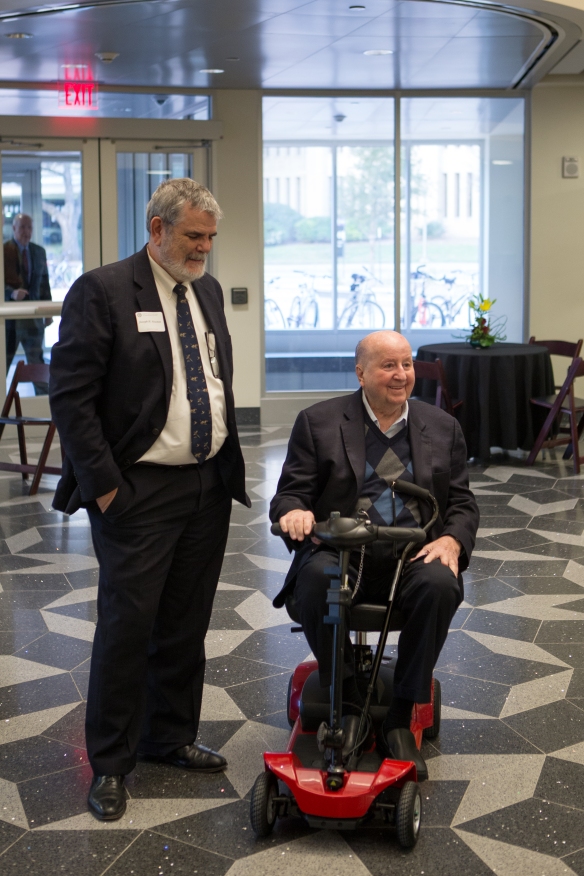 Dean of Science Joe Newton and George P. Mitchell ’40 prior to a November 2012 event celebrating his $20 million legacy gift to his namesake George P. and Cynthia Woods Mitchell Institute for Fundamental Physics and Astronomy at Texas A&M.

1 thought on “Life Forces and Legacies”