I took a Facebook quiz last week that pseudo-scientifically confirmed my suspicions: I’m becoming more analytical and order-driven versus creative and imaginative in my older age. I’m not sure if it’s a side effect of being a parent or working among scientists for the better part of the past 15 years, but clearly, it’s taking its toll. Yep, there are no two ways about it. I’m growing up.

Fortunately, that doesn’t mean I have to abandon all hope, especially when I’m surrounded by people who cultivate curiosity for a living. People like Nick Suntzeff, who can copy me on a recent announcement about a community photography exhibition and inspire not one but two story ideas. While the rational side of my brain tells me I’m already hopelessly behind, the creative side insists. And remembers that secondary idea when I finally find the time to execute it exactly a month later on a Sunday morning while drinking coffee and chilling in the recliner and avoiding laundry. Pretty cool by any mental stretch, not to mention one of the biggest positives about smart phones.

But back to that spinoff idea. Nick and I were discussing how cool it is that there are two glass plates taken by world-renowned astronomer Edwin Hubble right here in Aggieland through May — the obvious lead and primary story. However, one of the reasons I started this blog is to have a ready outlet for those secondary stories, ideally first-person wherever possible. Considering Nick is a champ in this category, another classic on curiosity is born! 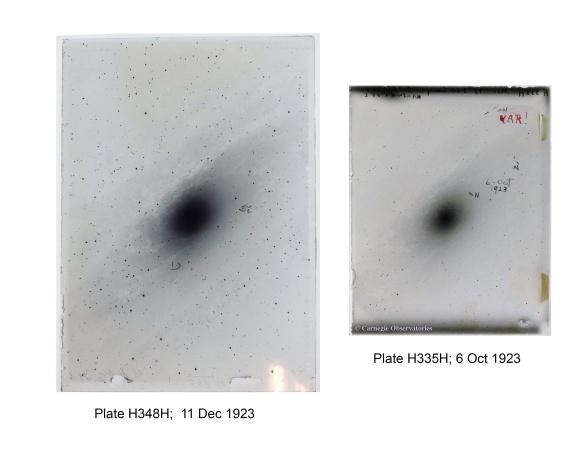 I’ll let Nick take it from here with his initial response to my dual pitch — a reaction that comes packed with the traditional bonus lesson or three. Enjoy!

Sure, anything to help motivate people to attend. If someone said that, say, that one of the petri dishes Salk used in discovering the vaccine for polio were on exhibit, I would definitely go to the lecture and exhibition! But most scientists, curiously, have no interest in anything else except their narrow fields. This is strange because we often hear that scientists do what they do because they have not lost their child-like interest in figuring out stuff. To me that means everything, including other scientific fields, the humanities and the like.

For instance, in the lecture in ASTR 101, I ask the question, why do we have the Olympics every four years? Well, obviously because the Greeks did. But why did the Greeks adopt four years? We all just think, well, why not? Or, who cares? But I think that it is an interesting question. And it turns out to have an interesting answer. It is because the Greeks were concerned/annoyed that the Sun and the Moon don’t have similar cycles. The Sun takes 365 (plus a bit) to go around the sky once relative to the stars, but the Moon takes 29.5 days in its orbit or 354 days to complete 12 orbits. That is, the cycles are off by 11 days, and this screws up the calendar such that the full moon does not fall on the same day each month. This is not an important problem to us today, but for a society which included number worship in their pantheon, it was really annoying. So they looked into how many solar cycles and lunar cycles it would take so that the Moon would end up being full on the same day of the month. There are various ways of solving this, but one way to notice that is, if you wait eight years, the calendar repeats itself pretty accurately. So the Greeks used an 8-year cycle for their civil holidays (that is, you only have to have eight calendars because the ninth will be the same as the first. So don’t throw away your calendars!). The number eight became an important number in their calendar, and the half-cycle became the Olympic cycle.

Later, another Greek astronomer came up with a better cycle of 19 years called the Metonic cycle, and for his discovery, Meton of Athens was awarded an Olympic laurel wreath. Cool! An astronomy event in the Olympics! I certainly would qualify for a bronze medal in writing memos.

Anyway, I just love this stuff. And while I can’t get many other scientists excited about it, I will never stop trying. 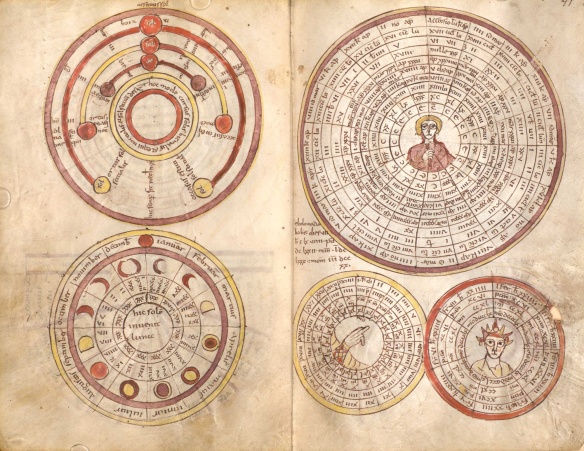 Depiction of the 19 years of the Metonic cycle as a wheel, with the Julian date of the Easter New Moon, from a 9th-century computistic manuscript made in St. Emmeram’s Abbey (Clm 14456, fol. 71r). (Credit: Wikipedia Commons.)